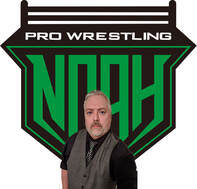 Founder of N3- Adam Leavelle
Imagine if wrestling looked like a legit fight. Every match was conducted like an athletic contest, where both participants, who looked like athletes, and not like people in the crowd, were striving to win, in order to climb up their perspective division rankings, in order to get a title shot. Imagine if a company focused on this style of presentation, not turning wrestling into a joke, or satire, or slapstick. Imagine if when you watched wrestling, you could believe in it, so much so that you got so lost into your enjoyment of it, that you didn't think about things like who was getting "pushed" or which "angles" or "gimmicks" were good, and which were not. Imagine if every single championship title meant something, and fans didn't call them "props." Imagine if promos weren't scripted, instead they were shot as if what you were seeing was real life, and that the wrestlers were real people, with real passions, and goals, that they could state in these promos, making you love, or hate them. This describes Pro Wrestling NOAH of Japan, and only ONE company in The United States, Major League Wrestling. If you want to know more about me, and my time in the wrestling business, as well as my search for "Wrestling Done Right," please click on my "Bio" at the link, at the top center of this page. I have worked for numerous "indie" promotions throughout the years.

​You can find my Twitter link below, along with links to my MLW Show, as well as "Wrestle Universe" where you can watch every Pro Wrestling NOAH show, and keep up with all that they do, as well as "NOAH's Arkive, the best place online for all NOAH news, translations, and articles, from Hisame Kurosawa, well known NOAH expert, and researcher, NOAH'S English Twitter page, and finally, NOAH's English YouTube page. Since the demise of the territory days, I have spent countless years searching for wrestling that fulfilled my passion for "Wrestling Done Right," and I am certain that Pro Wrestling NOAH, and MLW, are exactly that, and fulfills those needs. Get on the ark with me for Pro Wrestling NOAH and join The League for...Wrestling Done Right!